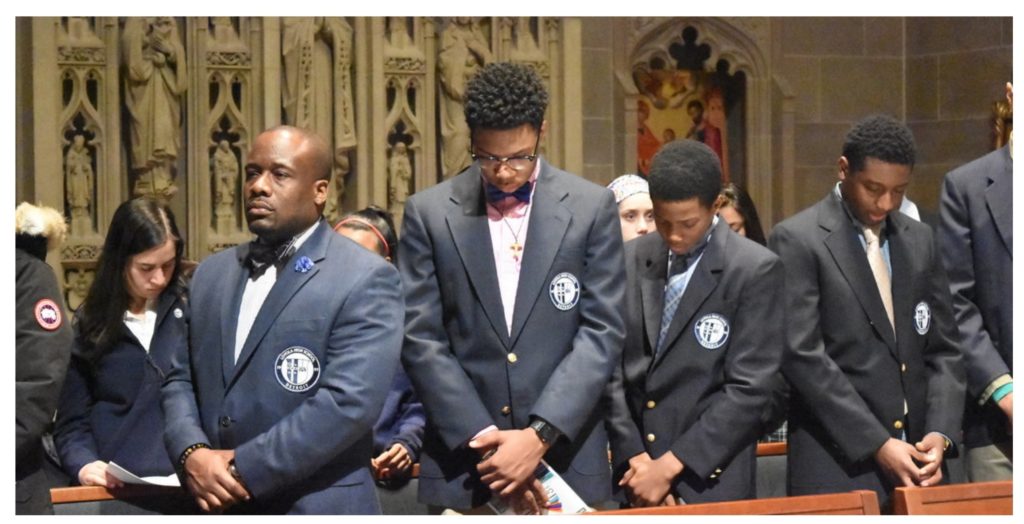 DETROIT — Bruce McDonald remembers being a teenager and getting his driver’s license. He was excited, as most 16-year-olds are, to visit friends and “explore the world.”

As a junior at Loyola High School in Detroit, McDonald recalls the first time he was pulled over by the police, driving down Mack Avenue near Grosse Pointe.

The officer didn’t exit the vehicle right away, but instead waited for “three or four” other police cars to arrive. When he finally approached, the officer made McDonald exit the vehicle and “sit in a puddle of water” while they searched the car. Without telling McDonald why he had been pulled over, the officers looked but found nothing.

“When he got me up, I was soaking wet and covered in water,” McDonald said. “He told me to be careful, and that was it.”

McDonald knows his experience with the police was relatively tame compared with the experiences of other young black men. And now, as the father of a young Loyola student of his own, McDonald fears for “what this world might have for my son.”

As the only predominantly African-American Catholic high school in Detroit, Loyola has been particularly affected by the events of recent weeks, beginning May 25 with the death of George Floyd in Minneapolis.

McDonald was one of several parents, educators and community leaders who spoke June 11 during an online town hall hosted by the school to discuss the impact of racial and social injustice — and more importantly, how the Catholic Jesuit-run school can be part of the solution.

“We know systemic racism exists, so we have to do a better job educating our students about what that means and how it impacts their lives,” Wyatt Jones III, Loyola’s principal, said.

Founded in 1993, Loyola has long been a refuge for inner-city youths who haven’t traditionally been afforded the same educational opportunities as suburban students. The all-boys school, which prides itself on forming “men for others” — the school’s motto, borrowed from the Jesuits — has as part of its mission the preparation of young men who “act with integrity, compassion and courage” in the face of challenges.

For 10 years in a row, all of the school’s graduating seniors have been accepted into college, a remarkable feat and a testament to Loyola’s lasting impact.

“Gandhi always said, ‘Be the change you want to see in the world,’” Jones said. “As educators, and particularly as black men, I think it’s important that we model what we want our students to be.”

In a “message of commitment” released in the days following the Floyd killing, Loyola’s leadership said it recognized that its mission of being a positive force for change “is needed today more than ever.”

Jones and David Smith, Loyola’s president, outlined several steps the school will take in the coming months and years to foster dialogue, including professional development for staff, community involvement and student-led programs to encourage honest exchanges on topics of race and inequality.

In the past, Loyola has offered a class on the “African-American experience,” which talked about race in the context of contemporary society. “We’re thinking of bringing that back,” Jones said.

Outside the classroom, the school will host forums to talk about racism and socio-economic disparities as a community, encouraging the authentic sharing of ideas and solutions.

“A small part (of that conversation) is about police brutality, but there’s a larger context that divides our country in terms of race,” Jones said. “We really have to be intentional in helping our students understand the broader context.”

While parents and teachers can do their best to insulate young people from harsh realities, it’s only when students learn to face challenges that they become part of the solution, Jones said.

“You can try your best to protect your sons and daughters from conflict, or you help them to understand it,” Jones said. “The best thing Loyola can do is not to silence the voice of our students.”

Clinical social worker and therapist Brian Chaney and Loyola parent Dena Greene also spoke about offering counseling resources for young black students — whether related to the current crisis or simply as part of growing up.

“A lot of students have anger, deep depression and anxiety because of their experiences in society, and now we have this experience,” Greene said. “As parents, community leaders and role models, we have to listen and validate and provide assistance.”

As a parent, Greene said Loyola’s culture of brotherhood and service has instilled values she’s proud to see in her son — from the school’s regular prayer life to its involvement in the Loyola Work Experience Program, which places students in professional settings to gain real-world knowledge and experience.

“It’s so important for them to get out into the community to see what it’s like to work in society along with other people who look different from them,” Greene said.

McDonald, who also is a board member at Loyola, said he was happy to see Loyola’s proactive approach, but said it’s also incumbent upon parents and community members to work for a better society — one that treats all individuals with respect and dignity.

“It was striking, damaging to watch a young man lose his life on television. How do we send our sons out and not fear for their safety?” McDonald said. “We use terms like ‘pray.’ I want prayer, but I also want action, I want improvement. I want a world where young brown and black men don’t have to fear coming home at night.”

As a black father, McDonald said he advises parents to “make sure we’re talking to our kids and understanding their concerns but also addressing them appropriately.”

“Don’t make our young men enemies of the police or learn to disrespect the police, because there are a lot of good people out there,” McDonald said. “But they also need to know how handle a situation if things go south. The goal is simply for our kids to come home.”

At the end of the day, prayer is the most important thing any parent can do — both to effect change and to know peace in a world that’s often violent and chaotic, Greene said.

“As a parent and black mother, if it wasn’t for the Lord at my side, where would I be?” Greene said. “If I don’t pray, I won’t have peace. I have to have prayed and cover him and know that God is going to take over where I left off.”

“We still have to lean on and put our faith in God,” McDonald said. “We have to become more dedicated to our faith. This is what Loyola has done for the past 30 years. We’re just going to be ourselves.”